[Originally in the July 16th Edition of my newsletter. It has been slightly modified and expanded upon.] 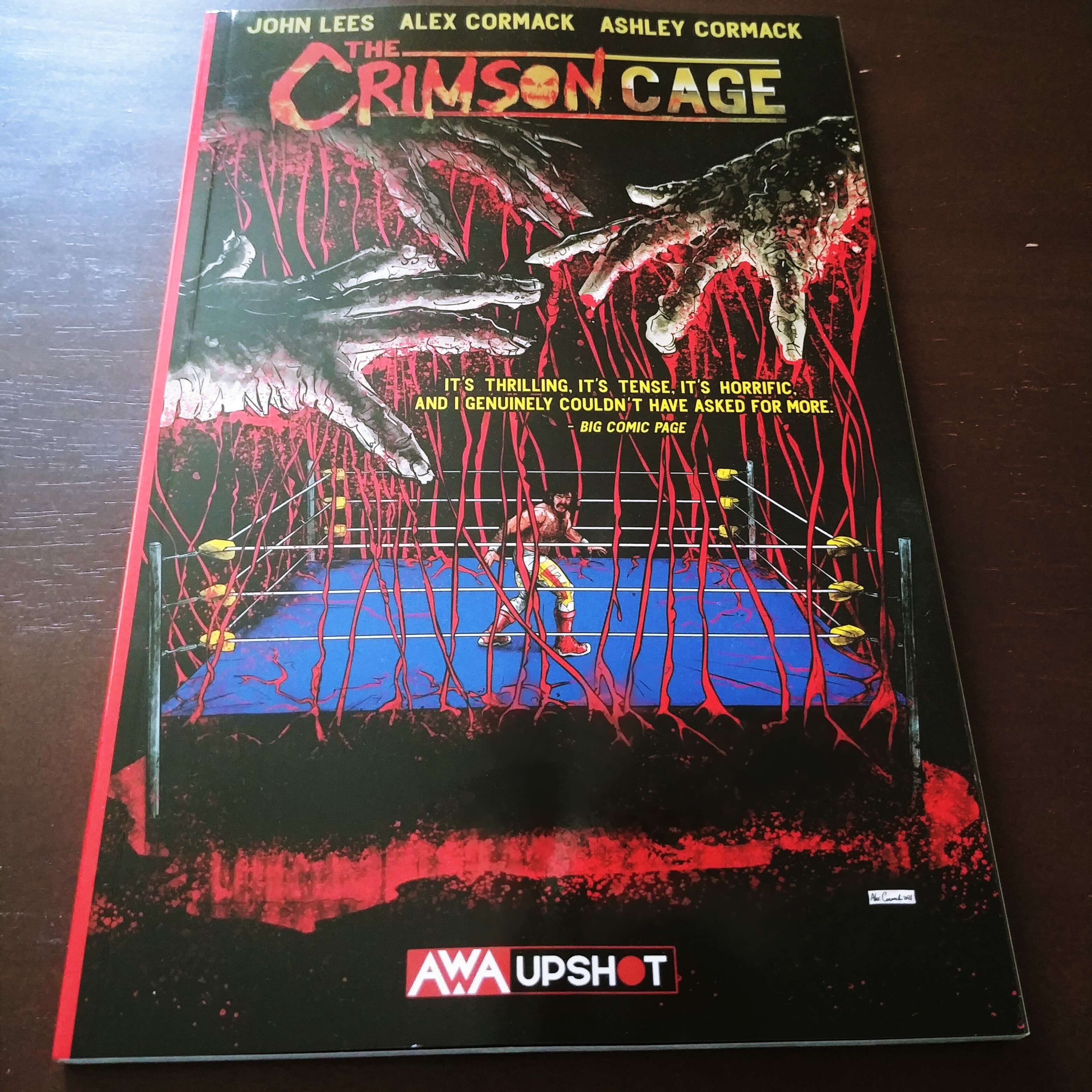 [In my previous newsletter] I talked about Dig #1 by John Lees & Alex Cormack and said I was excited to read their wrestling comic The Crimson Cage. Well, it actually came in the mail earlier this week. I didn’t get to read the whole thing due to being busy but I’ve read enough to be hooked.

The Crimson Cage is a retelling of Macbeth set in the territory days of early pro-wrestling. The protagonist Chuck Frenzy is a top star in the small LPW out of Louisiana. While loved by the fans, he craves a bigger spot and to be able to provide a good life for his wife and valet Sharlene. While out in the bayou after a night of drinking, he stumbles across three witches who tell him that he has the chance to become world champion. That is, if he is willing to do what needs to be done to take it.

It shouldn’t be a surprise to anyone who has been reading this newsletter because I’ve been talking about this book since I learned about it early on. The idea of Macbeth meets pro-wrestling is one that I’m sure other people had thought of, but only John Lees could pull off. The way it stays fairly accurate to the original story while adapting it to pro wrestling is really well done. It shouldn’t be surprising as Lees is a huge pro-wrestling fan with a love for the history of the business. There are so many nods to wrestlers and wrestling territories in this book. It even breaks wrestling down in a way someone who isn’t into pro-wrestling can understand and enjoy.

His love for Shakespeare shines as well and he does a masterful job of weaving the two together. While the scenes aren’t 1-to-1, you recognize what is happening and can see the parallels clearly. One scene that sticks in my head is Chuck and Van Emerald (the King Duncan of the story) on the bridge. That scene and the subsequent match between the two work to give Chuck that justification that wasn’t present in the original story. And when you think about it, turning a crown into a championship title isn’t that much of a stretch. Also, Turning the soliloquies into wrestling promos staring at the ‘camera’ is a really brilliant touch that merges the two ideas so well.

As someone who both studied and performed Shakespeare in college, I’d have loved to tackle this version.

As always Cormack’s art compliments Lees’ writing so well. The sequences very much feel like an old school wrestling match. The motion, the action from panel to panel, the impact of each move. It all clicks. Once things move away from the ring, Cormack is in very familiar territory. I always enjoy the use of heavy shadows and darkness on the pages. And also, the amount of red when things get crazy. The color work by Ashley Cormack is outstanding here. Hassan Otsmane-Elhaou’s lettering and the logo are top notch as well.

So far, it’s been an interesting ride. One thing that Lees talked about in the afterward of chapter one is how with Shakespearean tragedies, we usually go in knowing how things are going to end. But the characters and story are as such that we hope that the characters don’t follow through. We secretly hope that they defy the foregone conclusion despite knowing that it’s already set in stone. It reminded me of watching Baz Luhrman’s Romeo + Juliet with my cousin as a kid and seeing her tearfully plead at the screen for Juliet to say something before Romeo drank the poison. She knew what was going to happen, but wanted so desperately for them to change their fates.

He relates to his (and my) favorite wrestler Bryan Danielson’s match Survivor Series match against Brock Lesnar. We all knew Bryan had no chance of winning the match, but he was so skilled that he was able to convince people that the impossible was going to happen. Even if for the briefest moment, he could make us believe that he was going to defy the odds.

I know how the story of Macbeth ends and am aware that Chuck Frenzy faces a similar fate. However, I am interested in seeing how they get there and a small part is hoping they are able to change fate.

Long story short, I’ve enjoyed what I read so far.

I’m coming back after finishing it to say that this book did not disappoint. While I said that I hoped Chuck was able to change his fate, Chuck’s actions and slow decent into madness only seals his fate. The actions he takes to preserve his spot ultimately made me want to see how much he lost in the end. The final match and the way that the witches prophecy comes into play was really slick and fully in line with the on-the-fly nature of pro wrestling.

And the ending was brutally satisfying.

After reading this, I find myself wanting to see other Shakespearean/Pro Wrestling adaptations . Hamlet is one that comes to mind. Romeo and Juliet. King Lear. Maybe this is the beginning of a Shakespearean Pro Wrestling Comic Universe?

If the idea of Macbeth meets pro wrestling sounds interesting to you, you can purchase The Crimson Cage on Amazon, the AWA website, or most outlets where books are sold:

This site uses Akismet to reduce spam. Learn how your comment data is processed.