[Originally written on October 7th for my Email Newsletter.]

September 30th was the Indianapolis Literary Pub Crawl and I was still unsure of what to expect or if what I’d prepared would be enough. I spent the morning getting ready super early and then walking in circles nervously checking to make sure I had everything. After about the eighth time, got everything tossed into the trunk and hopped on the road.

Because I wanted to have time to sit down and relax before it all started, I set it up so I’d arrive at the hotel about two hours before the event. However, I ended hitting heavy traffic maybe half an hour out of Hammond and ended up stuck for an hour. Then closer to Lafayette, I ended up stuck behind was must have been a pretty bad accident that also ended up causing everyone to cram into one lane. I had planned on arriving at about 2:30/3:00 PM ET but I finally got into Indianapolis around 4:25. After getting a quick bite, I hopped in the car and found my way to Fountain Square.

I got turned around a few times, but I think I made it to the venue at around 5 PM. As soon as I arrived, I sat down and signed the copies of Clusterf@#k. I’d left the books sealed when I shipped them just to be safe so I had planned to come in and sign them before they let people in. However, the venue seemed to be pretty packed when I arrived so there ended up being more than a few books that were unsigned. Still, I managed to sign most of them (and definitely more than 100 books).

When it was my time to take the stage, I was told that I’d have 15 to 20 minutes to do whatever I wanted. That felt like a lot of time and I was a bit nervous, but I had decided to do a reading of the first chapter of Clusterf@#k and then do a Q and A session. When I’d practiced, I originally hadn’t given the characters voices when I read through but changed my mind later. I’m glad I did because it got a great response. People loved it. It probably didn’t hurt that people had been drinking for at least half an hour beforehand, but it went much better than I could have expected. Afterwards, people seemed very excited about the book. 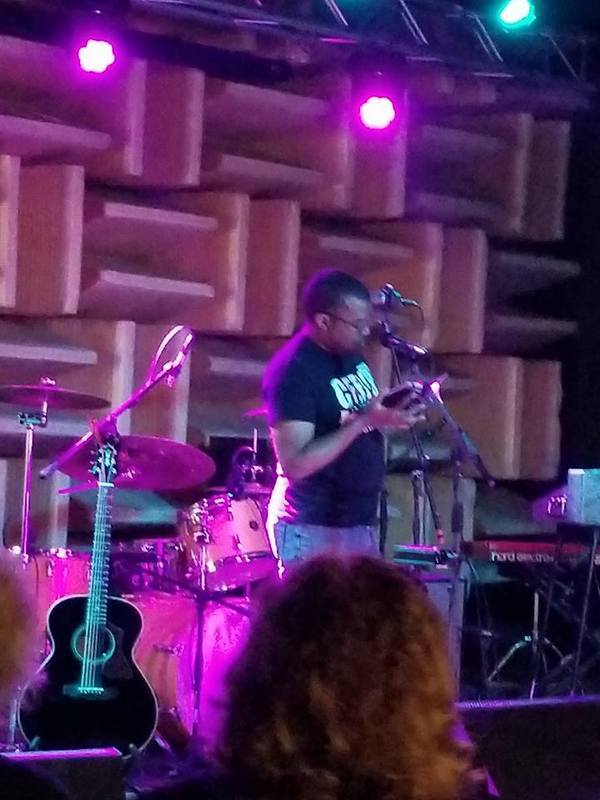 I also managed to run into several people with unexpected connections. One of the volunteers was actually friends with my cousin. Another was friends with my friend and college roommate. I even met someone who signed up for my email list at a convention earlier this year! He had wanted Clusterf@#k but didn’t get it (which he’d regretted) so it was great that he got a copy of the book with his ticket.

After the opening was over, we were split into groups and went to our first bar. Each group was named after the title of a book. I didn’t have an assigned group so I joined the Slaughterhouse Five group. I hung out with a small mix of people who had been there before. One of them was dressed as Ms. Frizzle from The Magic School Bus and a others were dressed as Alice in Wonderland characters. Everyone was really welcoming. As we traveled from bar to bar, people started getting a good buzz and becoming more comfortable. I ended up having some interesting conversations. Most of the conversations were either insightful or entertaining and only one made me mildly uncomfortable. It wasn’t a conversation so much as some one making a statement prefaced by ‘this is probably really inappropriate but…’

Still, it was more random than anything and it was something that I could easily laugh off. Who knows, it may even show up in a story later on.

At the very end, all of the group reconvened at the final bar for a costume contest and a raffle where they gave away a ton of prizes. One of the women in my group won multiple prizes but I think she bought a lot of tickets. After everything was over, I thanked Erin for inviting me and headed back to the hotel. I got up at the crack of dawn and was able to make it back home before noon.

It was a new experience, but a very good one. I am thankful for the opportunity to do something I’d never done before and a chance to share my comic with so many people. I was pretty nervous these past few weeks leading up to the event, but the events I’m the most nervous about end up being the ones where I have the most fun and feel refreshed afterward. So, I’m really glad that I got the chance to go and hopefully I can do it again.

Also, while I’m sure I’m not the first comic creator to do a live reading in front of an audience, I’m almost positive I am the first to do so in Indianapolis… while wearing a Pentagon Jr. t-shirt.

After a couple weeks, I finally trimmed the poster down and fit it in a frame.

This site uses Akismet to reduce spam. Learn how your comment data is processed.